I’ve performed difficult acts with a detached expression, felt various emotions under a stoic look yet, I have never been confronted with such difficulties as I did searching for a proper response to the participants of my weekly conference call that Tuesday morning. I assure you that I’ve been much closer to earning an Oscar at many other occasions than I was during this one. I fear not a consideration was even mentioned.

I woke up late for the call. I suspect because of a long night at the office. I stumbled out of bed bumping into the closet door, and banging my toe against the bathroom’s door frame. I toss water on my face, brush my teeth, speak a bit to myself to ensure I do not sound asleep, look down… and thank all goodness that I am at home not at the office. Like all healthy biologically functioning males, every night for a period of a few hours, God verifies that his tool of procreation is in working order.

Yes, I do sleep in the nude; being home alone affords me that comfort. I can wake up half asleep, be in full duty without anyone noticing that I’m more than ready for physical interactions. It takes a good ten to twenty minutes for the biological testing phase to return to a less obvious state. Much shorter if I wake up with a need to urinate, but today, I must be dehydrated because I have no urge to do so.

Instead of sitting down on the couch, I grabbed my work mobile and lean against the bar top dividing the kitchen from the living room. I have this oddity that if I’m clothes-less, engorged and on the phone, I end up stroking myself to pass the time while conversing. Knowing that I would eventually do that if I sat down, I decided to stay up and lean against the bar top. I dial in, wait for the tone to announce my late arrival, then greet everyone on the call.

My superiors are all present, as well as the head of two of our three large partners. We are going to be talking serious financial risks, and I am the knowledge behind the operation. I’m not all that late to the call thanks to my boss who is known for his southern hospitality. He talks for chunks of time about the least of caring topics. Now that I’m on, we are ready to talk risks. We take turns explaining the goals, expectations, and risks. 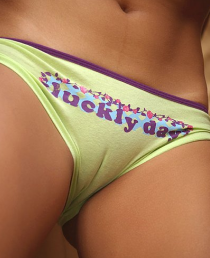 I had long ago forgotten that I awakened amidst anatomical testing of my body. I was tunneled into one thought: how to get those big clients to become bigger in order to spend more on us, on me. Suddenly the lights in the living-room power on. I think of ghosts controlling the remote controls, turn around in fright expecting to see a floating globule, but instead I see my neighbor in her undergarments… the yellow “Luckly Day” bottom disconnects my attention from financial risks, and quarterly expectations. I forgot that I found her inebriated the night before, and because she had no personal belongings on her, including her apartment keys, I brought her to my couch and allowed her to spend the night until she recovered, remembering where to find her keys.

With a soft and gentle tone she whispers for me not to be alarmed. That she will not be of bother to me while I’m on the phone. I look for something to cover up, but it’s too late. I’ve responded to her physique both mentally and physically. I’m mentally incapable of continuing the conference call, and I’m physically unable to muster strength to keep myself from another anatomical test. This time, however, I would hate for it to be just a test.

She draws close, I turn around giving her my back, figuring that at least she will not see my masculinity void of embarrassment thinking of her. She goes right into the kitchen, opens the fridge, pulls out a bottle of water, drinks from it and looks at me with a deviant stare. In the meantime, I am paying undividedly no attention to those on the phone. My attention has solely been tuned to the yellow panties.

She walks around the other kitchen exit leading me to believe that she’s on her way to the bathroom. I quickly look around, look down at my partner and can’t figure out where to hide. She wasn’t going to the bathroom though, she came behind me… her touch froze me. I didn’t move, I didn’t speak,I didn’t even breathe… I did, however, heard the voice of my boss asking me to answer the posted questions. I took a deep breath, it was more like half of an ill breath as only a quarter of my lungs answered the calling.

Her hands traced from my shoulders, down my back, up again to my shoulders, my neck, down the flanks. One hand caressed my buttocks, but the other, the other moved forward touching my hip bone, then tracing it down to my friend who had long ago been expecting her. I kept as much attention on the conference call as anyone on my position would. Intermittently losing my bearing when she would kiss my back, or stroke me. She stroke slowly, very slowly… telling me that she enjoyed how my physique felt on her hands, how the different parts felt as she moved up and down. That she wondered how different it would feel in her mouth, against her lips than on her hand.

The hand remaining on my rear was a daring one. She ran it up and down, squeezed, lightly smacked, even went down the middle reaching the front and caressing the confinement of my testicles. I apologized to those on the phone, expressed that I had had a slight distraction and needed the questions to be repeated. One of my bosses summarized the questions. I tried to respond best I could.

I lost my voice a few times, concentration to the call more than a few. Her interruptions of my work, while ill timed, were perfectly received. Her stroke had grown stronger, faster. I looked down to see the manicured long nails, and strong fingers working on me. I liked how she squeezed me tightly as if seeking to pop it like a balloon. Best yet, I liked that she dug her nails into me while whispering if I liked her behaviour.

I continued to answer the questions incoherently, articulating much of nothing, accompanied with a lot of deep breaths. My bosses weren’t very much please. I just didn’t have my full wits that morning. They were more a tune to the lips that approached me with a sweet voice that spoke of much needed lubrication. Telling me that saliva was much the needed substance. I went into her mouth, my mind closed to the call. I could only feel her lips tracing about the head.

The sounds she made making sure she salivated me throughly lured me in more than the prospects of becoming a wealthy individual as I would have had I answered those questions properly. I came back to the call under a heavy burdensome breathing. I tried to save what I could, but her inability to let me concentrate was deteriorating. By now she was back kissing my back, her right hand across my hip… down to me; tugging and pulling with serious intent. She spoke the whole time, my voice quivered on the phone; she asked if I liked her yellow panties, I mistakenly moaned on the call; she told me that I would climax on my hands, I raised my voice as if on the park; she said not to worry that she would lick it clean, I dropped the phone.

I went on to moan, curse, and bang my hand against the counter-top. I even apologized to those on the call. I know for a fact that they heard me climax because I was too loud, and they were still on the phone when my bearings were returned to my wit, and her mouth had completed cleansing her work. I’m still attempting to feel bad about not getting the clients to wager more money on me.